“Demon Squad is a lot of fun, and could very easily be made into a series… The film is well written and funny. Check out this southern fried demon movie whenever you get the chance!”

“If you like private investigators, fantasy creatures, steampunk, and indie film, I would recommend watching Demon Squad.”

“Demon Squad is a film noir with a dash of monsters and magic. If you’re looking for   comic book-style detective story with magic and demons, this one is definitely worth a look.”

This June, paranormal investigator Nick Moon discovers the truth is stranger than fiction.

Moon has more than just a hangover to contend with when he takes a case brought to him by the beautiful heiress, Lilah Fontaine. Moon and his psychic-in-training office manager, Daisy, and themselves navigating a hidden underworld of trolls, vampires, and other creatures of the night, as they quickly realize they’re on a hunt for much more than a priceless artifact – and that they’re not the only ones who want it.

Khristian Fulmer, Erin Lilley, Leah Johnson, Martin Ross Henne , Monica Ganoe and Eric Schmit star in the latest film from the award-winning filmmaker behind The Night Shift and Night of the Kampus.

Smith, who co-wrote with Erin Lilley, says “Being a lifelong fan of Mystery Science Theater 3000, as is most everyone involved with the making of Demon Squad, having our film featured on the show is surreal, but I welcome it.” 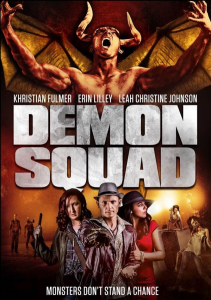 Official Trailer : WE FOUND SOMETHING – Coming this September!!

INFRARED – In this school, the first lesson is fear