Today we have a interview with Dream Round star Michael Saquella.

Born in Rochester New York, Michael Saquella was drawn to the stage as a young man and has been entertaining for nearly 4 decades. His versatile acting skills have landed him roles in film, television, comedy and live entertainment. Michael’s entertainment career began when he took to the stage as a stand-up comic, opening for notables such as, Charro, Tony Bennett and Rachel Welch. Michael showcased his talents when he wrote, starred in, and made his directorial debut in the horror film “Blue Lake Butcher.” As an actor he also starred in the movies “Used Cars”, “O’Hara’s Wife”, “Assassin”, “Second Chance”, “Lady Blues”, “News Traveler”, and “Desert Rose” .Michael directed, and wrote the film “Ambush at Peck Canyon”, based on the true story of murdered Border Patrol Agent Brian Terry. A career highlight for Michael was starring in a leading role in the film “Forget About It”, featuring Hollywood Icons Burt Reynolds, Raquel Welch, Robert Loggia and Charles Durning. Michael also starred in films, El Coyote” and “Dream Round”, Michael directed, co-wrote and starred in his most recent film, “Carolina’s Calling” which is currently in post-production and will be released in theaters in 2021. Michael is a comedian and a blues singer, Michael wowed audiences with his impersonation of the late comedic talent, John Belushi in live worldwide performances in both “Legends in Concert” and “Legendary Superstars”. As a comedian Michael preformed all around America. Here is our interview with the amazing Michael Saquella: 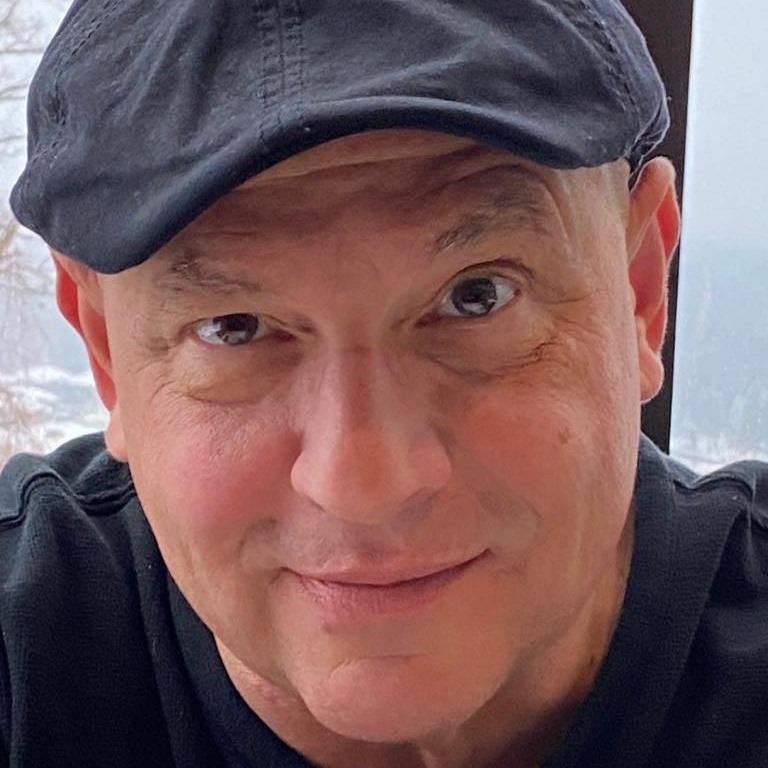 GRUEMONKEY: How has COVID affected your film work and what did you do during the lockdown/pandemic?

MICHAEL: My work came to a complete stop near the end of March. I went back into pre-production in late May. We started filming my latest film, Carolina’s Calling, on June 15th. During the lockdown, I ate way too much food and binge-watched several shows.

GRUEMONKEY: I think we all ate too much during lockdown (Laughs). How do you juggle being an actor, writer, director, and producer?

MICHAEL: I try not to do more than two jobs at the same time. Being an actor and a director works well together while producing and directing works together. Being an actor and a producer doesn’t work because it is difficult to stay in character while on set. Writing always happens first before all the rest, except when there is a need for a re-write, then it is all four at the same time. 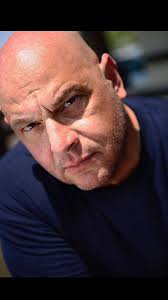 GRUEMONKEY: You co-wrote, produced, and starred in Dream Round. Tell us what your story or inspiration was to write this film?

MICHAEL: I’ve played a lot of golf and even had the inspiration to be a PGA pro someday. I was inspired by watching Morgan Freeman play God in a film; this inspired me to combine golf with a ghost. After three days, I had the full concept.

GRUEMONKEY: Morgan Freeman is just amazing! Can you tell us what the film is about and a little about your character in Dream Round?

MICHAEL: I play Joe Bona. A few years ago, he had the chance to play pro golf, but decided to raise a family instead. I loved this role. The story shows Joe’s struggle after the death of his loving wife and two small children in a car accident 15 years ago. His wife’s final words were that Joe follow his dream as a semi-professional golfer to become a pro. The death of his family turned his life upside down. Fifteen years later, Joe meets a former pro golfer who appears out of nowhere to get him back on the course. Joe befriends his clever 10-year-old neighbor Sarah and a beautiful waitress Jennifer, who both have suffered tragedies of their own. Their commonality creates a bond. Joe becomes inspired by a chance to play the dream round of his life. 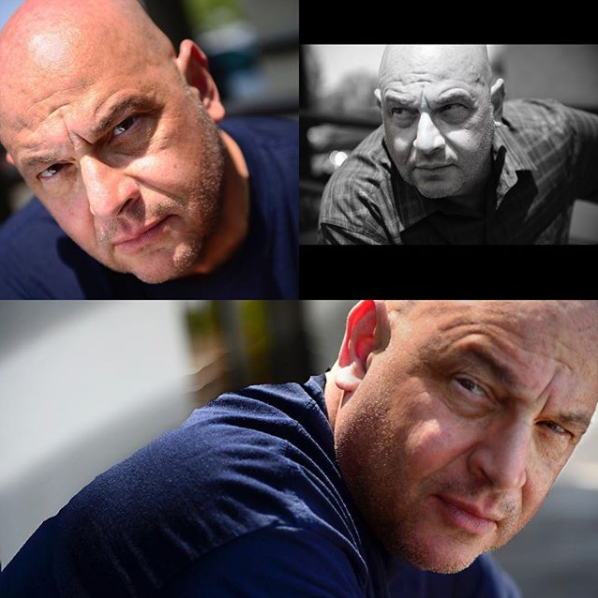 GRUEMONKEY: That’s very emotional. Any funny or cool behind the scenes stories you can share with us from the set of Dream Round?

MICHAEL: For one particular scene we were filming, we didn’t have enough background players to fill in around the 18th green. This is where Joe Bona must make the putt to win the Open. The scene would have looked small if we filmed the ending with only eight background players. During the summers in Arizona, they have monsoons. All of a sudden, black clouds show up, and then a huge monsoon storm hit. Anything that wasn’t tied down went flying everywhere. The hard rain showed up, and we all go running for cover to wait. After 30 minutes, we had to cancel the day. When we regrouped to shoot the ending scene, we had a great crowd, which was a better look for the film. I thank the Arizona monsoon for saving our ending scene in Dream Round.

GRUEMONKEY: Wow, that’s crazy. Tell us about the film you wrote and directed called Carolina’s Calling and how it was like working with Antonio Sabato Jr?

MICHAEL: The film Carolina’s Calling is about two engineers, Martin and Tom, who are in the final stages of developing an infinite source of power that will revolutionize the world. A premature test run causes an explosion so forceful that it demolishes the lab and simultaneously sends a blast into space, striking an unsuspecting alien ship. The ship plummets from the sky and lands in a remote area of South Carolina. The alien uses his telepathic powers to summon Martin, hoping to receive the help he so desperately needs to get back home.

Antonio Sabato Jr. was a blast to work with.  He is a great actor and treats everyone equally. He also brought great ideas on how to do a scene. He works well with all the actors. He rehearses with the smaller role actors so they will perform at their best. As a Director, he was great to work with. He listens and takes direction.

GRUEMONKEY: Can you tell us about the horror film you wrote, Blue Lake Butcher and what frame of mind you must put yourself in to write a horror film?

MICHAEL: I had a vision for several months about six poles.  I kept saying six poles everywhere I went. In the car, at the mall, at dinner, and even before bedtime. I like the Hannibal Lecter character played by Sir Antony Hopkins. I wanted to combine Hannibal with the Texas Chainsaw Guy but using two machetes. I came up with the idea of putting six high school graduates on the six poles, and with classical music playing, our lead bad guy (me) would chop up the kids to the beats of the music.

My frame of mind was that I wanted to write, produce, act, and direct a gory / horror film. I pushed myself into the Blue Lake Butcher and I loved every minute of the process.

GRUEMONKEY: I love Gory Horror films too. This movie is great! What was Burt Young like?

MICHAEL: Burt Young is a gentleman; he was kind and funny. He had great stories, and many of them were from the Rocky films. We became friends. I would visit him from time to time. He is a great actor. He listens to everything and never missed his lines. He was a real pro. 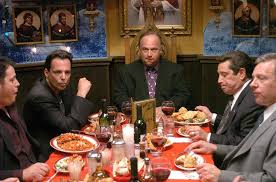 GRUEMONKEY: He seems very down to earth. Favorite moment or scene from Blue Lake Butcher?

MICHAEL: My favorite scene was the six poles scene because of all the gore.

GRUEMONKEY: Love that scene. The more gore, the better. Any stories you can share with us being on set with Burt Reynolds in Forget About It?

MICHAEL: When I was a young teenager, I met Burt Reynolds on a set of a movie called Lucky Lady. I was able to meet him, and I asked his advice on how to make it in the industry. His advice to me was to reach for the stars and never give up. At the time, I didn’t have a clue what he was talking about. He also told me that I need to harness that feeling. I still didn’t have any clue what he was talking about, as I thought a harness had to do with horses. Then I finally figured it out! I was getting ready to get my driver’s license, and since I wanted this so bad, I had the feeling. I’ve used the advice from Burt Reynolds to help me launch my career. I was sitting on the set of Forget About It with Burt Reynolds under orange trees; I brought up that the day when I met him when I was only fifteen years old. He told me that he remembered who I was. I couldn’t believe that he remembered me.  A few weeks later, at a Minnesota Vikings game on the Fox Sports Network, Burt Reynolds was a guest talking with Joe Buck and Troy Aikman, who are the announcers. He brought it up on national television. Burt was a great guy and we became close friends. Whenever we would go out anywhere, he would hit me like he had hit Dom DeLuise…people would laugh at us like they did in the Cannonball Run films. 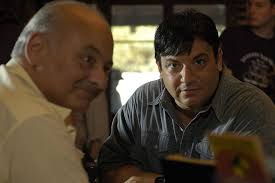 GRUEMONKEY: What are some hobbies or stuff you do for fun outside of film?

MICHAEL: My hobbies or stuff I like to do are smoking cigars, cooking, singing the Blues, and going to the mountains.

MICHAEL: I love entertaining; I am a Bluesman and a comedian.

MICHAEL:  In my younger days, it was Brigitte Bardot and now I would have to say Anna Faris.

GRUEMONKEY: Guilty Pleasure Movie or TV series you are watching?

MICHAEL: “Your Momma Don’t Dance,” and “Your Daddy Don’t Rock and Roll.”

MICHAEL: At my age, I can still do one-arm cartwheels and round offs while holding a microphone. (Blues Brothers act).