We are very excited today to show you all our latest interview with Donta Storey. He is known for his work on Lime and the upcoming horror film Dooley Does Murder.

Donta is a actor, writer and director from Los Angeles. In 2020, Donta released the directorial debut film, titled LiME. LiME was awarded at the San Francisco Black Film Festival and screened at the Outfest Fusion Film Festival in Los Angeles in March 2020. LiME was originally released April 1, 2020 via Amazon Prime video, and has since found its way to several streaming services. LiME will be available to stream on http://www.dekkoo.com/ on September 30, 2020.

As we discussed in the interview, he will also be doing a upcoming horror short called Dooley Does Murder. Gruemonkey caught up with Donta to discuss everything in this great interview. Check it out!

GRUEMONKEY: Who were some of your film role models?

DONTA: I respect and admire the works of John Singleton, Dee Rees, Spike Lee, and a few others, but they’re at the top of my list for sure.

GRUEMONKEY: When did your love for horror start, what film or films started it?

DONTA: My love of horror started with Candyman, but soon after SCREAM was released and that is what really sent me down the rabbit hole of horror. I was born in the late 80s and raised in the 90s, so I loved The Faculty and all the teeny-bopper horror flicks that were released during the slasher, and horror resurgence.

GRUEMONKEY: Tell us about LIME and the experiences of your character and the environment?

DONTA: LiME is a film that follows a young man named Deshawn and him trying to navigate the world while living and walking I their truth. Deshawn is loosely based on me and the things he goes through in the film are directly related to my younger experience. I love that the movie, while it centers around someone and their queerness, at its core, it’s a film about overcoming adversity, and everyone can relate to that.

GRUEMONKEY: What is Compton California like growing up in?

DONTA: Compton is a place of culture, and it for sure has a reputation that it’s outgrown. Compton is more of a town than a city in size, and honestly, it was a great place. I love that city- It’ll always be a part of my story.

GRUEMONKEY: How was it like working with the cast of LIME?

DONTA: My cast was amazing. I have so much appreciation for the creatives that signed on to do this project. The story is a tough one to tell, but everyone in front of the camera, and behind the camera felt the need to be there. Everyone brought their best!

GRUEMONKEY: What was your favorite moment or scene from LIME?

DONTA: I really enjoyed working on the drill team tryouts. Those scenes are filled with so much love. On-screen everything seems so isolated, but we had around 20-30 people watching, and there to support.

GRUEMONKEY: Where did the story of LIME come from and how did it impact the outlook on your life?

DONTA: LiME is based on my youth, and the experiences I had learning to walk my own path. I wrote LiME in 2018 and decided to send it to production as soon as I was finished. As an actor, you don’t get to steer the ship, and I decided that I wanted to be a part of the conversations inspiring and molding our world. I had written tons of scripts before but directing in an official capacity was just a dream, and without me knowing it, forced me to challenge myself and my dedication to my artistry.

GRUEMONKEY: How did it feel to have your film LIME play at the Outfest Fusion in the shorts To Be Young Queer and Black Program?

DONTA: I’ve been a fan of Outfest for many years, so it was amazing. I really appreciated being a part of the festival because it uses its platform to lift the voices of queer storytellers, and it was amazing to finally screen the film in my hometown of Los Angeles. I’m grateful for the Outfest.

DONTA: I think progress is a slow-burning candle, but progress is progress. Being black is to first be black in this world, so yes, being black in this business can be tough, and that’s because you are often overlooked for opportunities in front and behind the camera, despite your resume and qualifications. I love that we have people like Misha Green, Ava Duvernay, and Jordan Peele amongst so many others paving the way for black and persons of color in this industry, in front and behind the camera. I think being queer has its own set of hurdles but being black and queer is also super dope. People on the spectrum can bring a different narrative to the room, to stage or screen, and it’s important to have that spectrum of experiences, so I’m blessed to be invited because of my talent, my experiences and not because I’m the Token, in any regard. I think Hollywood and the world are waking up- they don’t have a choice. 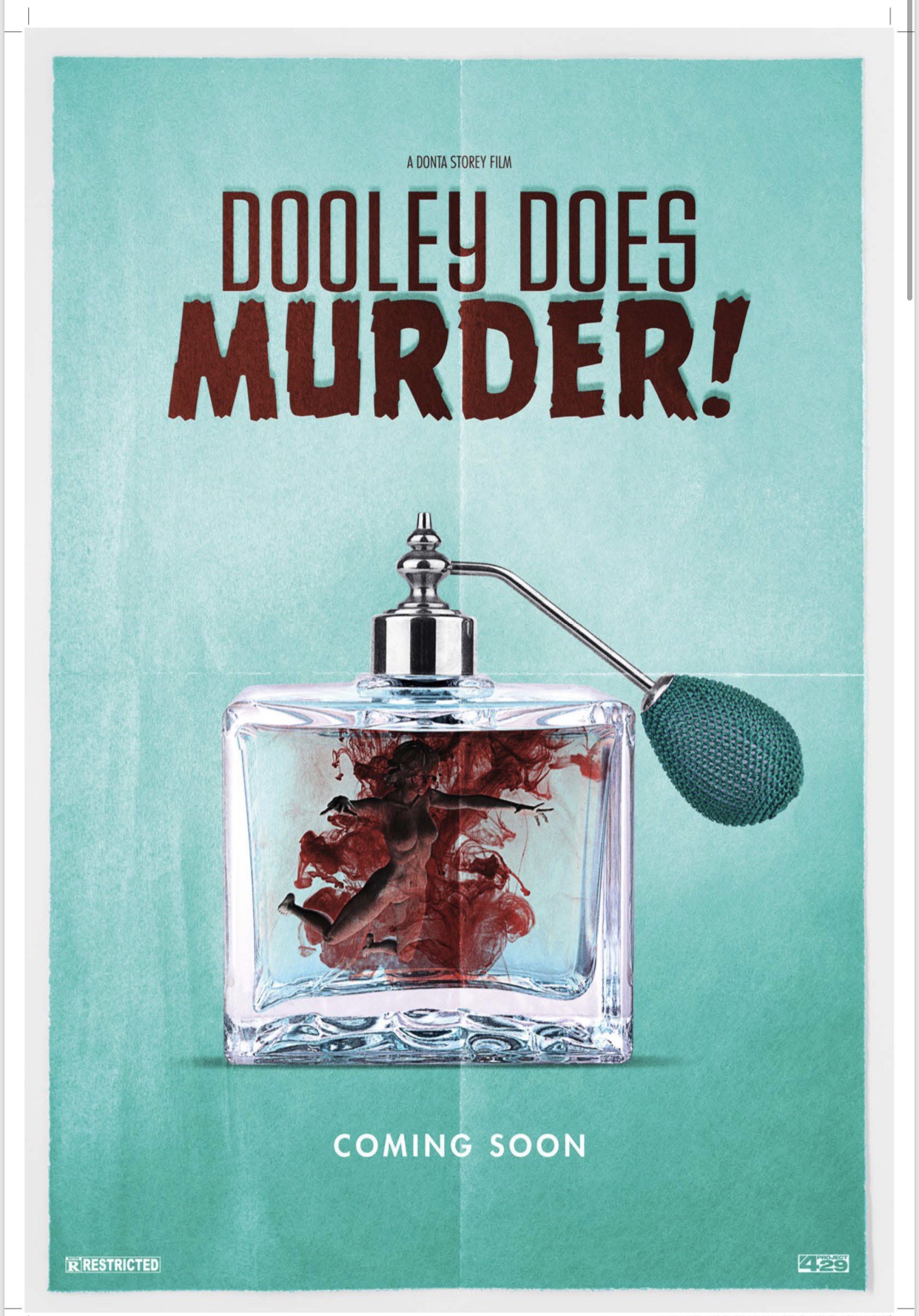 DONTA: I honestly did not have one… I don’t think it’s something that everyone has, some of us go through life just knowing, and having the support of those close to us. For me, it was just something that my family and friends knew about me. Not until adulthood was I able to truly explain the complexities of my identity and sexuality, and honestly, it’s still evolving. (Laughs).

GRUEMONKEY: What can you tell me about your new horror short Dooley Does Murder?

DONTA: Dooley Does Murder! Is a film about a young door to door vintage perfume salesman who begins to struggle with controlling his psychopathic tendencies when it comes to his obsession for the human neck. There’s a little sexuality, a bit of dark comedy, and of course murder! I wrote, will direct and star as Dooley, so it’s gonna be a huge undertaking, but one that’s really exciting. It’s my stylized love letter to campy horror. I want people to have fun, and also, I wanna have fun as a storyteller. I think it’s really dope to have highbrow horror, but it’s also necessary to tell stories that freak folks the hell out for fun!

GRUEMONKEY: Tell me your top 8 favorite horror films and why you like them?

2. SCREAM, because it’s a part of my DNA, and it was the first slasher film that I fangirled over.

3. Tales from the Hood is my third because it was before it’s time, well, not really, because racism and anti-blackness are a part of this countries DNA, but it was one of the first horror films that I was able to relate to on a grounded level.

4. Candyman, its poetry, and it’s something that has always freaked me the hell out. I love the themes the film explores as well.

5. Jeepers Creepers because the ending of that film is perfect. The film is a slow-burning panic room for me. I saw it couldn’t get over the ending, it still bothers me. I LOVE IT!!,

6. Hereditary, because of WTF? It’s one of those films that you sit and talk about for hours and hours. I thought the acting was phenomenal, and it’s one of those movies that sticks with you.

7. Get Out, because who doesn’t like a good documentary?

8.The Shining… it’s a classic, and like SCREAM, I watch it every Christmas!

GRUEMONKEY: What are some of your favorite songs and why you like them?

DONTA: I’m a huge BRANDY fan, so anything by Brandy, if I had to choose it would be Nothing and Angel in Disguise, but I have so many. I also really love The House of the Rising Sun by the Animals, and I put a spell on you by Nina Simone.

Freeballing, Being Nude, Boxer, or Briefs around the house?

I think a crooked smile is something I really find attractive, and arrogance is pretty much an immediate turn-off.

Guilty Pleasure tv series or movie you are currently watching?

Lovecraft Country & I May Destroy you on HBO. I’m also re-watching WATCHMEN… oh, I love to binge Curb Your Enthusiasm.

Hidden Talents or something fans might not know about you?

I collect stamps, and I’m obsessed with anything Flamingo! I’m also a big HALLOWEEN fanatic!

I actually don’t do Karaoke.