Shameless films bringing The Beyond to Blu-Ray in January!!

When jaded New Yorker (Catriona MacColl) inherits a New Orleans hotel, she calls on composed local doctor (David Warbeck) to contain the inexplicable and increasingly gory accidents that are plaguing the building and its grounds. But soon the Gates of Hell themselves open under the hotel, rendering their fight futile as the dead emerge to walk the earth in Fulci’s masterpiece of metaphysical horror The Beyond.
NEW EXTRAS
– ‘Emily’s Eyes’ – an interview with Cinzia Monreale (with English subtitles)
– ‘Arachnophobia’ – an interview with Michele Mirabella (with English subtitles)
– ‘Murder, They Wrote’ – a unique interview with scriptwriter Giorgio Mariuzzo on working with Lucio Fulci (with English subtitles)
– Prologue four-way comparison showing the original colour, B&W, standard sepia and the new, fourth-way, a golden version of toning over colour

ARCHIVE EXTRAS
– Sergio Salvati (Director of Photography) feature-length audio commentary dissecting the film – with new English subtitles
– A feature-length audio commentary from stars Catriona McCall and David Warbeck
– Lucio Fulci speaks (short conversation on a film set)
SPECIAL BLU-RAY FEATURE
For the first time ever The Beyond is presented with four different versions of the prologue, seamlessly branched, allowing fans of Fulci’s masterpiece to see the original colour footage which the film was actually shot on, as never seen before and show the various stages of the post-production process of this landmark film.
– The now accepted standard sepia
– The original colour camera footage
– The B&W version
– A new fourth-way: presented as an homage to director Lucio Fulci and DOP Sergio Salvatti for the first time ever. For this new alternative prologue version Shameless have used the restored colour camera footage as a base on which a new golden toning was applied in reference to known considerations from Salvatti. The result is that the reds of the gore are now strikingly visible and all the light sources such as the torches and car headlights are much more luminous
TECH SPECS
– From a new 2K scan
– Region B
– 1080p HD
– Original aspect ratio: 2.35:1
– Audio: English and Italian with English subtitles
– Catalogue number: SHAM214
Shameless presents The Beyond on Blu-ray on 13 January 2020 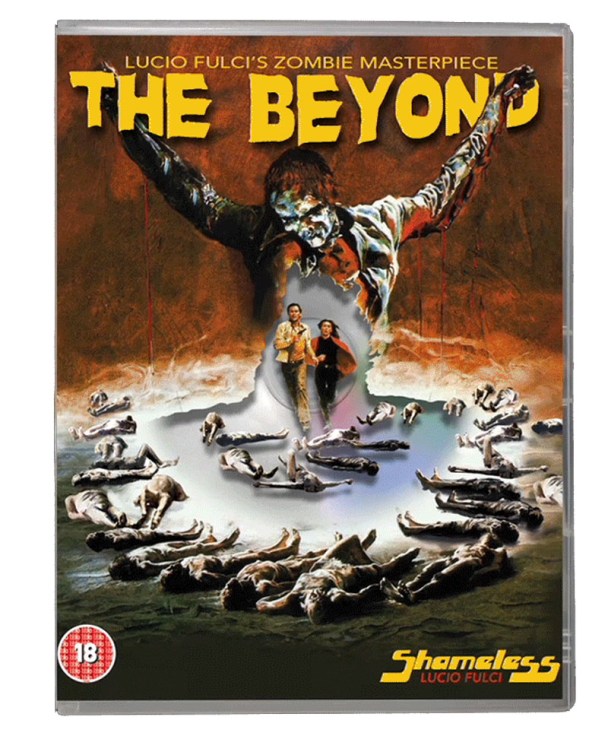