The UK Gruemonkey team has been busy this Halloween season. The team luckily got to attend XScreamEvents.

XScreamEvents invited Gruemonkey UK to attend its latest attraction in Croydon. This attraction is titled ‘THEM BELOW‘.

‘Them Below‘ is a limited pop-up horror attraction, and worth a trip!

Throughout WW1, rationing meant that humans famished under the rarity of even the most basic of food. However, this took their toll, and primal instincts played its part in one particular hard-of-luck family after losing their home. 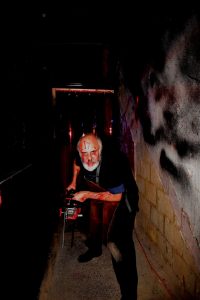 “The Draven’s” took to the underground web of tunnels and sewers below Croydon and while food became harder and harder to gather, this family found a better way to feast. Seeking those most vulnerable in Wandle Park, Henry (40) and Evelyn (36) would feast upon their flesh. Even the children, Charles (16) and Judith (14) would join in on the hunt.

On 15th September 1919, Henry and Evelyn embarked on their next routine hunt, which would turn out to be their last. Gregory Tobin (28) was walking through the park after attending “The Old Fox & Hounds” when he spotted them trying to attack. After making a narrow escape, Tobin alerted authorities at a nearby Police box.

A week later, both Henry and Evelyn were arrested by Police and sentenced to death by hanging, however, the children were yet to be found. From searching the tunnels, authorities knew a few items within were missing, but the whereabouts of Charles and Judith are still a mystery to this very day.

Every 10 years near Halloween, the spike of disappearances in the area increases, with little evidence or suspects coming to light. As Halloween draws closer this year, the list of people missing increases. A recent eye-witness claims that a human-like creature dragging something to a nearby basement, and it is up to you to uncover the truth. Will you survive, or will you be caught by “Them Below”.

‘Them Below‘ is un-suspectingly tucked under a local 5-Guys restaurant. Just to the side, you see a dark and decaying urban entrance. Down some creepy and creaky stairs further into this hellish basement, you wonder what you have walked into. 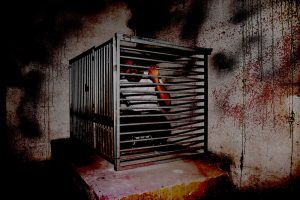 Luckily you are greeted by a lovely professional team that give you full health and safety low down. After your briefing, it is go time! Entering through a red plastic abattoir like sheet the immersion begins immediately. You are introduced to a Youtube blogger who is exploring these underground terror traps. I don’t want to tell you the story but the Youtuber gives you the full rundown on ”The Dravens” who allegedly stalk these underground tunnels. Let’s put it this way, it isn’t long until you are running for your life. The haunt itself takes you through various scenarios and settings each with its own unique styling. All complete with live-action actors willing and ready to scare the living crap out of you. Even the seasoned horror Gruemonkey team found themselves picking up the pace to escape. 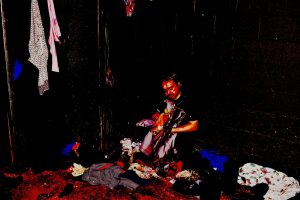 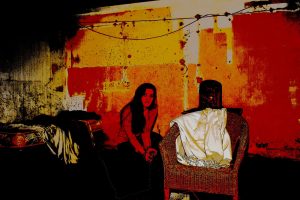 The event is a fully immersive experience that uses a variety of clever and twisted ways to make you believe in your environment. The actors do a great job, and the overall effect is very satisfying. We were lucky to go through the experience twice and what was interesting was the actors swap their parts around, I liked that because though fundamentally the same story transpires it makes it slightly unique and different.

If darkness is something you are scared of, do not attend this attraction – there is one part in total darkness (my favorite part) and it is TOTAL darkness.

My only criticism was the event wasn’t long enough! Which is a good position to be in when you are reviewing something. This is a pop-up event and i would love to see what the creative team could do with a bigger, permanent setting. Fingers crossed.

IF YOU WANT TO CHECK ‘THEM BELOW’ OUT YOU MUST HURRY IT IS A LIMITED ATTRACTION.

Be sure to check this event out this Halloween whilst you can. It’s an inexpensive and fun addition to a Halloween celebration, book online now!