Today we have a horror icon. Thom Mathews. Everyone knows him from cult horror films The Return of The Living Dead and Friday the 13th Part 6: Jason Lives. Thom has also been in multiple tv series including: Dynasty, Falcon Crest, Paper Dolls, Mr. President, and ER. His first break in the horror world was when he starred in his first horror film The Return of the Living Dead as he played Freddy. He then went on to star in Friday the 13th Part 6 Jason Lives as Tommy and Return of the Living Dead 2 as Joey. He also reprised his role as Tommy Jarvis in Friday the 13th fan film Never Hike Alone. He stars in a new horror film that came out this year called Killer Therapy as John Langston. Here Is our interview with Thom Mathews: 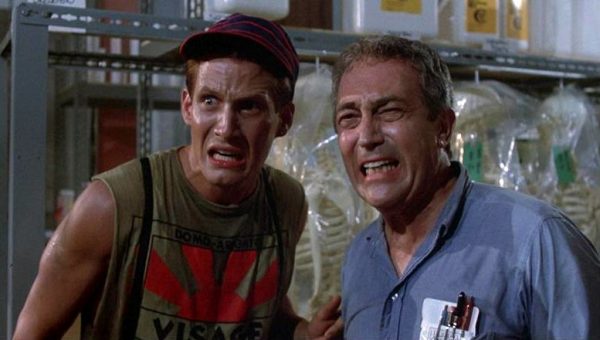 HELLTER: How was it like playing Freddy in Return of the Living Dead and what are some of your best memories on set from the film?

THOM: PLAYING FREDDY WAS A GREAT ROLE. THE CHARACTER ARCH FROM BEING A INNOCENT YOUNG MAN TO BECOMING A FULL BLOWN ZOMBIE IS ONE ILL NEVER FORGET. IT WAS SOME MUCH FUN GOING TO THE SET EVERY DAY. HANGING WITH JAMES KAREN MOST OF MY SHOOTING DAYS. LISTENING TO ALL HIS GREAT STORIES OF HIS LIFE AS AN ACTOR AND MORE! IT WAS A TALENTED CAST.

HELLTER: What’s your favorite scene and favorite kill in Return of the Living Dead?

THOM: I HAVE A LOT OF FAVORITE SCENES FROM THE MOVIE. ONE OF MY FAVORITES IS WHEN THE GUYS HAVE THE CONVERSATION WITH THE ZOMBIE HALF COPSE LADY. HER SPINE BANGING BACK AND FORTH ON THE TABLE. THEN WE FIND OUT THE REASONS THE ZOMBIES WANT TO EAT BRAINS! EPIC!! 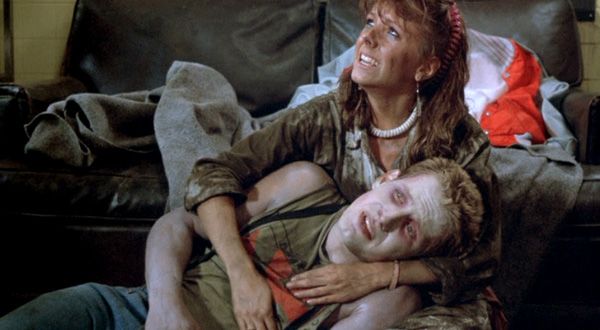 HELLTER: How do you feel about the huge cult following Return of the Living Dead has? Did you ever think this film would be so huge years later?

THOM: THE CULT FOLLOWING SEEMS TO KEEP GROWING FOR ROTLD. ITS MIND BLOWING. NONE OF US HAD ANY IDEA THE IMPACT IT WOULD HAVE. ITS NO WONDER BECAUSE THE MOVIE STILL HOLDS UP TODAY. WE HAVE A NEW GENERATION OF FANS.

HELLTER: You work with Scream Queen Linnea Quigley in Return of the Living Dead and she appears topless alot in the film (laughs). How was your experience working with Miss Quigley and do you two still keep in touch?

THOM: YES WE DO! A TRUE PROFESSIONAL! ITS ALWAYS GREAT SEEING HER AT THE HORROR CONVENTIONS. 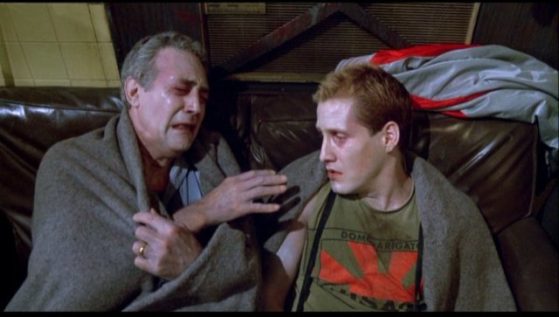 HELLTER: Were you a fan of zombie films prior to Return of the Living Dead?

HELLTER: You play a human then you transition into a zombie. What did you enjoy most, being a human or a zombie and was it hard portraying a zombie?

THOM: I ENJOYED THE LONG TRANSITION FROM BEING A HUMAN THEN TURNING INTO A BRAIN SUCKING ZOMBIE. 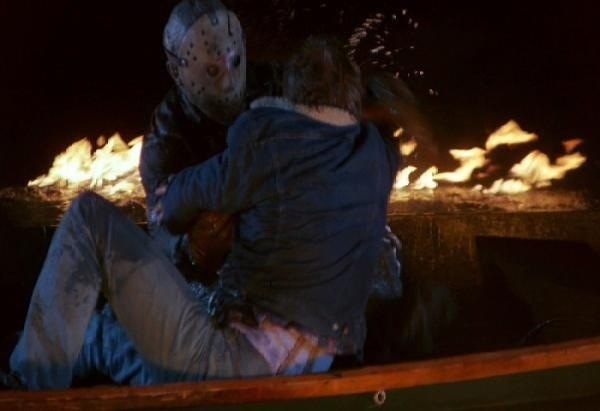 HELLTER: In Return of the Living Dead 2, you return but as a different character, how did that happen?

THOM: THE JAPANESE DISTRIBUTORS WANTED JIMMY AND I BACK!

HELLTER: Did you watch Corey Feldman’s performance of Tommy Jarvis before you auditioned for the role as Tommy in Jason Lives?

THOM: I SAW ALL THE FRI 13TH PRIOR TO SHOWING UP ON THE FIRST DAY ON THE SET. 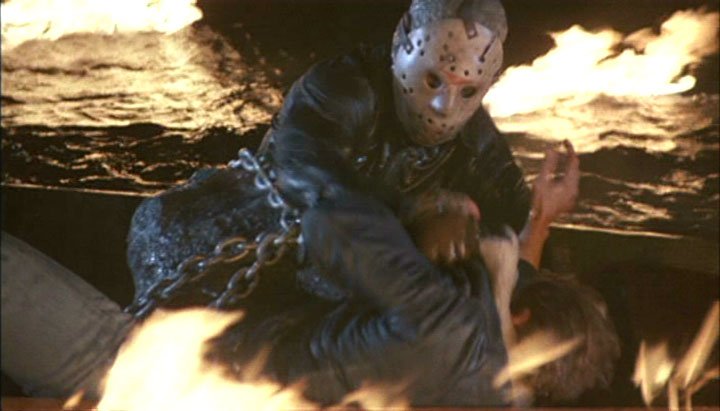 HELLTER: Did you feel any pressure thinking that you had to have a great performance as Tommy since your took over the role from Corey Feldman?

THOM: NOT AT ALL

HELLTER: How did you like working on Friday the 13th Part 6 and any fun stories about being on set?

THOM: ANOTHER GREAT ROLE IN AN ESTABLISHED FRANCHISE. HOW LUCKY WAS I! PART VI WAS FANTASTIC EXPERIENCE. A GREAT EXECUTION BY TOM MCLOUGHLIN OF A SCRIPT CONTAINED WITHIN THE FRI 13TH FORMAT. TOM WAS AND IS A CLASS ACT. IT WAS A HARD SHOOT WITH RESPECT THAT WE WENT FROM DAY TO NIGHT SHOOTS. I REMEMBER WE WERE SHOOTING A SCENE IN THE SHERIFFS OFFICE. THE CAMERA WAS TURNED AROUND ON ME FOR MY CLOSEUP. IN THE MIDDLE OF MY SHOT ONE OF THE CREW MEMBERS HAD FALLEN ASLEEP AND STARTED SNORING SO LOUD WE HAD TO STOP. EVERYONE ON THE SET STARTED LAUGHING. 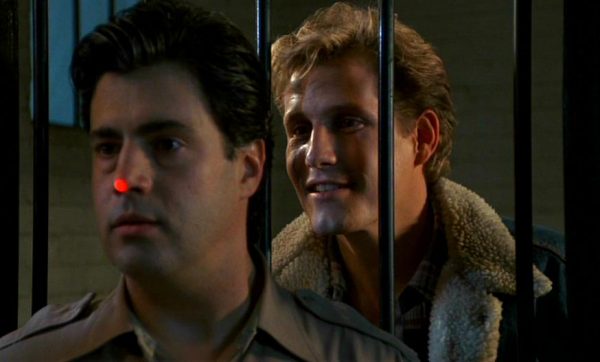 THOM: I REALLY LIKE THE OPENING SEQUENCE OF THE MOVIE. BUT MY FAVORITE SCENE IS THE SHERIFFS DEATH. JASON BENDING HIM BACKWARDS GAVE ME CHILLS. HORRIBLE DEATH. IT PLAYED BETTER IN THE DAILIES.

HELLTER: CJ Graham did such an amazing job as Jason Voorhees, how was it like working with CJ as Jason? 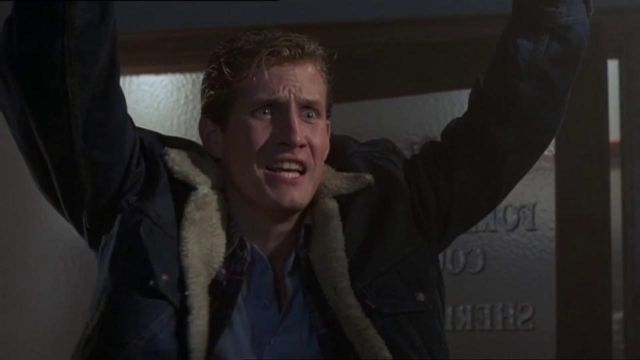 HELLTER: Why do you think your character of Tommy Jarvis drove to Jason’s grave site to stick a pole threw him and then the plan back fires and he awakens Jason and Jason has been on a murderous rampage and even stronger, thanks to Tommy (LAUGHS)?

THOM: AH BECAUSE TJ WAS HAVING NIGHTMARES AGAIN AND NEEDED TO MAKE SURE HE WAS DEAD! I WOKE HIM UP AND PUT HIM BACK DOWN IN AN HOUR AND A HALF! JASON BELONGS IN HELL.

HELLTER: How was it like shooting at a real camp and what would you do if you were camping and saw a guy in a hockey mask in the woods?

THOM: I ALWAYS ENJOYED SHOOTING ON LOCATION AS APOSED TO FILMING IN A SOUND STAGE.
I’D RUN LIKE HELL! 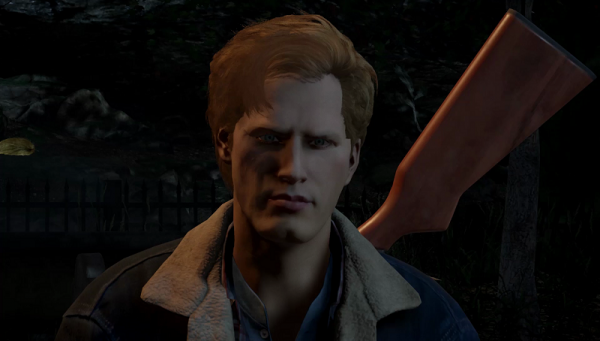 HELLTER: How did you get involved in becoming Tommy again in Friday the 13th The Game, how did that process go?

THOM: GUN MEDIA REACHED OUT TO ME AND ASKED ME IF I WANTED TO BE INVOLVED IN THE GAME. WE WENT BACK AND FORTH WITH THE IMAGE OF ME AS TOMMY JARVIS. IT WAS AN INTERESTING EXPERIENCE. THEN I DID MY VOICE, THE ADR IN STUDIO.

HELLTER: Did you enjoy being part of the game and have you played it yet?

THOM: I ENJOYED BEING INVOLVED IN THE GAME. LIKE I SAID EARLIER ABOUT ROTLD, FRIDAY THE 13TH HAS A NEW GENERATION OF FANS. GAMERS!
I HAVE PLAYED. ONE OF MY SONS HAS AN ACCT. ITS KINDA FUN WATCHING HIM PLAY ME TRYING TO GET JASON! 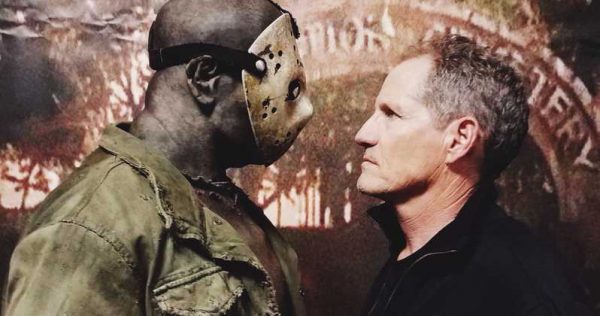 HELLTER: Never Hike Alone is a fan made Friday the 13th horror film. But it has gained so much popularity and alot of people want to see it. How did it feel playing Tommy again and battling a new Jason?

THOM: WELL ITS ON YOUTUBE FOR ALL TO SEE! MADE BY FANS OF FRIDAY 13TH FOR THE FANS OF FRIDAY THE 13TH.
IT WAS APPROPRIATE FOR TJ TO COME BACK. HE’S STILL WORRIED ABOUT JASON AND WON’T REST UNTIL HE’S WIPED OF THE FACE OF THIS EARTH.

HELLTER: Your thoughts on the actor Vincente Disanti as Jason compared to CJ Graham as Jason? Since you fought both Jason’s.

THOM: VINCENTE WAS ALSO THE DIRECTOR AND DRIVING FORCE OF “NEVER HIKE ALONE”. HE’S A RISING STAR WITH AN AMAZING CAST, CREW AND FAN SUPPORT. OUR FIGHT SCENE WAS OFF CAMERA BUT STAY TUNED…..

HELLTER: Anything else you wanna discuss or promote?

Spend a weekend camping at the real Jason Lives location in August!!