60th Anniversary for A Bucket of Blood!!

In honor of its 60th anniversary, this Olive Signature edition of A Bucket of Blood celebrates the film’s enduring legacy. Shot in five days on a shoestring budget of $50,000, A Bucket of Blood remains one of the most iconic collaborations between Roger Corman and Dick Miller, and has rightfully earned its “cult classic” status.

With A Bucket of Blood, the multi-talented Roger Corman singlehandedly created his own genre hyphenate: the black-comedy-beatnik-culture-horror film.

Dick Miller (Gremlins, The Trip) stars as Walter, a busboy at the hep-cat hangout the Yellow Door Café who dreams of artistic greatness. Inspired by the scribes and artists who surround him, Walter is introduced to the world of sculpture quite literally by accident – thanks to thin walls and a sharp steak knife. From his very first piece – the aptly titled “Dead Cat” – Walter is hailed a genius by the art snob set, a wunderkind who, unbeknownst to his doting devotees, has raised murder to the level of high art. But when the tortured artist turns his creativity towards the human form, he’s sure to make their blood run cold.

Rounding out the cast are Barboura Morris (The Trip, The Haunted Palace) as Carla, the woman of Walter’s dreams; Bert Convy (Semi-Tough) as undercover cop Lou Raby; Antony Carbone (Pit and the Pendulum) as Leonard, owner of the Yellow Door; and Julian Burton (The Masque of the Red Death) as Maxwell, the Yellow Door’s resident poet-philosopher.

A Bucket of Blood is written by Charles B. Griffith (Death Race 2000), photographed by Jacques R. Marquette (Burnt Offerings), edited by Anthony Carras (The Comedy of Terrors), with music by Fred Katz (The Little Shop of Horrors), and art direction by Daniel Haller (Pit and the Pendulum).

.
Mastered from new 4K scan
“Creation Is. All Else is Not” – Roger Corman on A Bucket of Blood
“Call Me Paisley” – Dick and Lainie Miller on A Bucket of Blood
Audio commentary by Elijah Drenner, director of That Guy Dick Miller
Archival audio interview with screenwriter Charles B. Griffith
“Bits of Bucket” – Visual essay comparing the original script to the finished film
Essay by Caelum Vatnsdal, author of You Don’t Know Me, But You Love Me: The Lives of Dick Miller
Rare prologue from German release
Super 8 “digest” version
Theatrical trailer
German theatrical trailer
Gallery of newly-discovered on-set photography 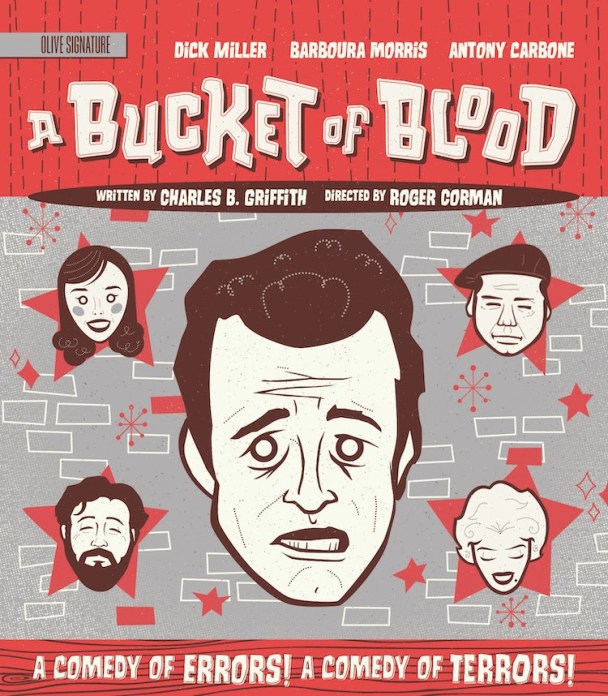