Gruemonkey’s Andrew E had the opportunity to sit down with BLIND star (and killer) Jed Rowen. Check out Gruemonkey’s recent review of BLIND here. Let’s hear what they had to chat about:

Andrew E: Can you tell me about “BLIND” and your character within it?

Jed Rowen: Blind, to me, is really a film about people dealing with loss. In the case of Faye, with the loss of sight, and in the case of Luke, with the loss of the ability to speak. My character, Pretty Boy, is dealing with the previous loss of having a home at some point in his life…and finally finding a bizarre temporary solution to his situation. All of the characters in the film, in their own way, are coping with their losses. They’re marginalized people, trying to figure out how to navigate through their challenging paths. 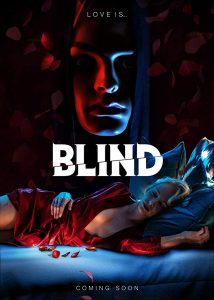 Jed Rowen: It was a totally fun shoot. I guess the hardest part about filming was that scene where I had to eat cold refried beans right out of the can. But by the third or fourth bite, I was even kind of into that. I learned you really don’t need to heat up beans. Yum.

Andrew E: Horror films can often have some intense things to film,- were there any elements that you struggled with emotionally, especially as you played the killer?

Jed Rowen: I’ve played these kinds of roles many times over the years. So approaching this character initially, I thought, would be kind of old hat for me, emotionally speaking. However, I realized as we started filming and the script was brought to life, that this was a way more emotional kind of story than I realized, and way more emotionally-driven than the typical horror film. Sarah’s performance was extremely emotional. So I realized that I had to somehow match that, or really complement, her emotionally charged performance…all the while being behind a mask…and doing it in Pretty Boy’s own unique way. All that is not that easy, if you’re really serious about making it work, which of course I am. But with Marcel’s fluid style of directing, and the dreamlike way it was shot by Thomas Rist…along with Joe Knetter helping out on set with valuable input…and me focusing intensely behind that mask….I think we got to a special kind of place. I don’t know if that answers your question, but I would say the elements I ultimately struggled with emotionally were not necessarily some of the grisly things I was doing. It was the challenge of channeling all that emotion somehow through a mask.

Andrew E: Can you tell us any behind the scenes moments from ‘Blind’ that was fun?

Jed Rowen: The whole movie was fun, from start to finish. As deadly serious as everyone was with bringing their ‘A’ game, it was like going to a party every day with your best friends. I guess my favorite recollection, my most fun moment, and not to give anything away…was when everybody applauded what I did in the final scene. That was not just fun, but a real moment of triumph for me. That kind of fun was sheer joy. As an artist, I live for moments like that.

Andrew E: I thought you really shined in the movie, I think your portrayal was spot on – How do you prepare for a role?

Jed Rowen: Pretty Boy was a very interesting role because not only was I behind a mask, but there were also no lines. Usually, an actor with a lead killer role like this has at least a monologue to work with at some point in the movie. And even if it’s a short one, you can nail whatever you’ve thought about or prepared for the character in those lines. So I had to come up with other things to bring to the character…to make it my own, so to speak. I decided that I was going to bring all sorts of nuances to Pretty Boy…subtle gestures, poses, and movements. A totally different approach than the over-the-top way you’d normally play a lead killer. And I chose to be very reactive to not only Sarah’s [Sarah French] performance but even, in varying degrees, to the other characters I dealt with. In other words, I played Pretty Boy a little beta…. 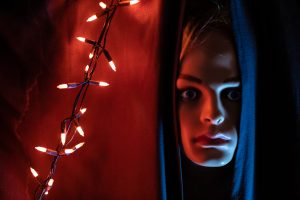 Andrew E: Would you go back to film a Blind sequel? From seeing the film I think that it has the potential to be an indie franchise, would you like that?

Jed Rowen: Of course! And why indie? Let’s make it a doggone studio franchise! Woof woof! And, hell, let’s make 12 or 13 of them.

Andrew E: How would you feel about the title ‘Scream King’ being attached to you? – after all, you have some serious horror credentials behind you. Would you wear the crown with pride?

Jed Rowen: It’s definitely time for a new Scream King. And I feel I’m just the man for the job. Yes, I’d wear the crown with pride, and do it plenty of justice. I’d like a nice long reign, too.

Jed Rowen: Okay, you asked for it. Reader beware, lots of titles coming up. I have a lot of great projects going on. One of my very best films, Impact Event, directed by Brian Barsuglia, got great distribution and will be released later this year. It’s an awesome apocalyptic sci-fi thriller starring myself and Tasha Tacosa, along with Michael Berryman. Another feature I’m in, also directed by Brian, Dr. Jekyll & Mr. Hyde, is also being released later this year, and it’s Mickey Rooney’s very last film. It won a ton of awards on the film festival circuit. I also got Xenophobia, an amazing sci-fi epic, being released worldwide in August. Horror maestro Joe Castro directed the segment I’m in. I also acted in another Giantess film by Jeff Leroy; got a great role in Mark Groves’ Aliens and Dragons which shoots in Colorado later this year, and I shot a post-apocalyptic film in AZ with Angelo Lopes earlier in the year. Breaking Barbi, a film starring Vera Vanguard and directed by Edward Negron, is making its mark all over the world. And a short film I did, Jason Kartalian’s The Last Callback, is screening at film festivals. Okay, I’m rambling here, I’ll stop…but you asked! I’m sorry, but not every year is like 2019…lots of great things happening this year. 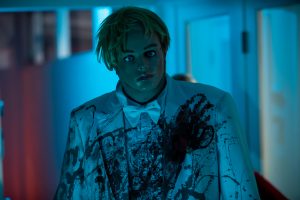 Andrew E: What is your favorite horror movie?

Jed Rowen: My favorite horror movie of all time is The Texas Chainsaw Massacre Part 2. It is also Joe Knetter’s favorite film. The best horror movies are the Theater of the Absurd, and in this department, TCM2 takes the cake. Nothing really comes close to it….the movie is freakin’ sacred text. You can imagine how thrilled I was to shoot a scene with Caroline Williams in Blind.

Jed Rowen: Far and away, living any kind of normal life.

Jed Rowen: Oh yeah. Why do you think I’m so into horror and sci-fi movies…

Jed Rowen: I’d love to teach Otis a lesson in the next Devil’s Rejects/3 from Hell installment. That would make a Caroline Williams/Bill Moseley Texas Chainsaw Massacre 2 sweep for me! Who knows, maybe Rob Zombie will call me in for an audition…Rob, you reading this? I’m on Facebook…

Jed Rowen: Yeah…it’s high time I get a website going…you raise a good point…. For the time being, check out my imdb….and keep going back to it, over and over again. It helps my Starmeter rating. [Click here to see Jed’s IMDB] 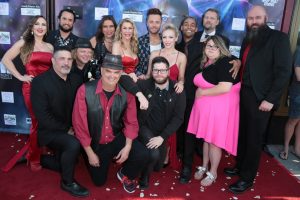 Jed Rowen: My favorite role of all time is Sluggo… in my favorite movie of mine, Paul Bunnell’s The Ghastly Love of Johnny X. I talk about this movie way too much at dinner parties and social events but I just can’t help myself. Maybe I need to start talking about Pretty Boy some of the time now, too. He does, after all, have his very own action figure and Halloween costume coming out. He might wind up giving ol’ Sluggo a run for his money as my all-time fav….we’ll see. Whatever happens, I’ll still be talking’ about Sluggo in Johnny X way too much.

Jed Rowen: Not to be diplomatic, but I’ve honestly loved playing all the characters I’ve ever played. It’s always fun to take on a role, and I never complain about getting paid to play make-believe. Even seemingly boring or small roles like cops or detectives or soldiers or homeless people are fun to play. I just love being an actor and adore working on all these crazy movies with all these crazy
filmmakers.

Andrew E: Thank you so much for chatting with us! Here is to Pretty Boy! Let his murderous rampage continue. 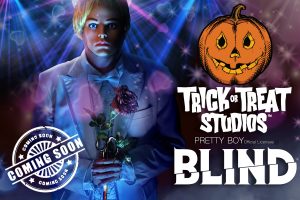