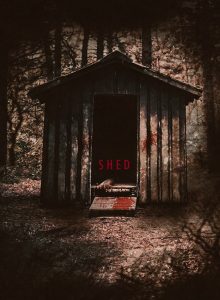 SHED is an independent horror movie with skin-stealing monsters. But really, it’s about love.

A tiny crew of lunatics made SHED in Columbia, South Carolina in late 2018 … during a hurricane. SHED is bloody, sexy, weird and transgressive.

Gruemonkey was lucky enough to watch an early exclusive screener of ‘SHED‘.

What did I think of Film?

SHED is a throwback to the 1980’s slasher. Something you would expect to see a Brinke Steven’s or Linea appearing in.  With a shit tone of gore and of course nakedness. The story starts with a woman walking through the creepy woods carrying bloody skin (as you do).

The movie then jumps to reveal an older man called Mike dressed as Santa Claus preparing for a Halloween party, nothing says Halloween like a creepy Santa –  this got me instantly in the mindset of ‘Silent Night, Deadly Night’. Mike in true horror style puts a ‘Keep Out’ sign on his Shed and loads a shotgun. Audiences are introduced to guests arriving at Mikes annual Halloween party on his remote farmland (of course) in true horror movie party set up there is dancing, drinking, and naturally a three-way (like every party – right?). 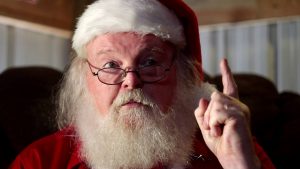 Mike has a reputation for wild and over-exaggerated folk tales/conspiracies, the craziest being that centuries ago skin stealing creatures lived and now live among the general population in secret. Two of the party goers go outside for some fresh air and stumble across the earlier shed with the ‘Keep Out’ sign on it.

Of course, they go inside (of course!) One of the two is killed, the other one runs back to the party and telling everyone of the murder, yet when the character gets back to the party the murdered character appears to be fine. The basic plotline of the film turns out that skin stealing creatures from Mike’s stories are real, and that they are determined that no one is to survive the party, so they can take everyone’s skins! 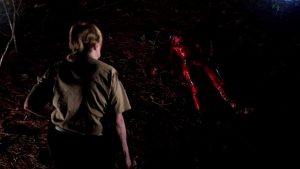 Though the plot feels rather formulaic of a slasher, it is good. It felt as a fan of indie horror – this film knew what it was and had fun with it. The blood and gore factor alone needs to be applauded it appeared to be mostly practical effects, which I like – they were not afraid to coat their actors in blood. I also appreciated the nod to the gender fluidity that was referenced with the skin creatures a nice modern commentary subtly in there.

The film does have its issues – there are some sound issues which at times can be distracting, and the odd questionable acting choices (I personally love b-movie acting) but not so much that you won’t enjoy a blood-tastic romp through the skin stealing creature feature that is SHED.

Andrew E was lucky enough to speak with the director David Axe about SHED, check out the interview below.

Andrew E: Can you tell me about “SHED”?
David Axe: It’s a gnarly little indie horror movie with skin-stealing monsters. But really, it’s about love. Made by total lunatics with more enthusiasm than good sense in Columbia, South Carolina during a hurricane. 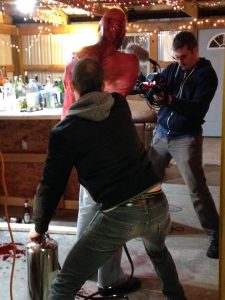 Andrew E: It looked like a fun shoot, what was the hardest bit about filming?
David Axe: Everything was hard. Our first night of shooting literally was during a hurricane. We had no money, precious little experience and several of us were drunk and/or high throughout production. Lots of people quit. I cast one part like three or four times. You can spot the actresses changing if you look really closely.
Andrew E: Horror/thriller films can often have some intense things to film, were there any moments that you struggled with?
David Axe: We splattered a very large quantity of stage blood and that shit is a bitch to clean up. But the hardest part was our skin effects. Very hard to do with no money. It’s all latex, spandex, hair spray, makeup, and gel. Some of which is quite toxic to some people.
Andrew E: Can you tell us any behind the scenes moments from ‘SHED’ that were fun? 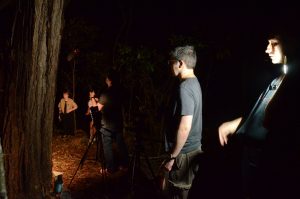 David Axe: I loved busting out our “blood cannon,” a device similar to a potato gun that effect supervisor Brandon McIver invented. It shoots ungodly amounts of fake blood.
Andrew E: What’s the biggest challenge of making a movie on a small budget?
David Axe: People quit. And you have to work around everyone’s day jobs. So it’s late shoots on weekends. And you have to move fast. It’s easily the hardest thing I’ve ever done, and I’ve been to actual war a few times.
Andrew E: Are you happy with SHED? Did it turn out to be what you wanted it to be?
David Axe: I’m happy. We made a movie that had no right to get made, especially by people like us. And we’ve learned a lot. I’m still tweaking our sound mix a bit — the sound is fucking hard — but the version of the movie we have in the spring of 2019 is something we’re all very proud of. We played at Motor City Nightmares in late April in Detroit to a packed room and it killed.
Andrew E: What is next for you?
David Axe: Making a weird little political thriller called LECTION this fall. It’s like a local election in a Mad Max universe.
Andrew E: If you could direct a sequel in an existing horror franchise who would you take on?

David Axe: THE VOID. Our heroes end the first movie in a Hell dimension. Now what?

Andrew E: Where can people follow your work?
David Axe:
https://www.facebook.com/lectionmovie
https://www.facebook.com/shedthemovie
Andrew E: Finally, How do people see the movie?
David Axe: We’re just starting our festival run. Give us six months or so and we’ll get U.S. distribution sorted out. Follow us on Facebook for updates.
Thanks so much for chatting with us at Gruemonkey! Andrew E! 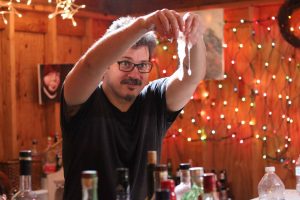