Official Synopsis: A woman wakes up locked in a small room with no memory of how she arrived there. Unable to escape, and tormented by a series of paranormal entities, she must uncover the riddle of who she is and how she got here.

Jane Doe (Johanna Stanton) wakes up in a disturbing, dirty and grubby room with no memory of how she ended up there. There’s is nothing in the room other than a disgusting bed that nobody would want to sit on unless they were actively seeking an infection, a locked door, and some creepy set dressings. Nightmare based people (or demons/ghosts?) taunting her.

Let’s breakdown some of these hellish characters: 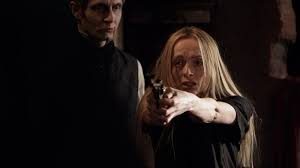 The above-mentioned characters are brilliantly placed in the story and acted to perfection.  Their purpose is to help Jane to unlock her memories and figure out what has/is happening.

The film slowly filters little snippets of information as the audience tries to figure out who these people (ghosts/ demons?) are and what they represent. Before I (at times I can be a little slow) figured the plot of this film out I felt like I was trapped in a psychotic episode of a hellish nature. It felt dreamlike and like being caught in the worst nightmare of your life. Johanna Stanton delivers her role well, giving the right levels of tension, misunderstanding, and disbelief in her performance. As the leading lady, she was perfectly cast, her ability to hold the audience in suspense and feel everything from empathy to shock and disbelief I highly commend.

When researching the film before I was lucky enough to review it, I found this snippet below which I was going to re-write as it captured the latter half of the movie perfectly. But I am simply going to quote it for you below as it sums the last parts of the film brilliantly;

“The last two-thirds of the film kick into high gear as the truth of what is happening to her [Jane] comes to the front in a jarring series of mental doors being unlocked. The constant presence of the lecherous Husband is unsettling. However, he’s outshined by the Wife. Debbie Rochon is a B-movie Hall of Famer and one of the more underrated talents out there, and she goes deeply method in what may be the meatiest role in the movie. The Wife herself is a victim of the Husband. The only difference is that she has someone to take it out on while Jane Doe has no such recourse. Most of the film’s nastiness comes from Rochon giving it every ounce of abnormal psychology she can muster, which is no small amount.”

I hope you don’t mind, but I felt it proper to honor the above passage than re-create a sub par retelling.

#Incredible performance by Debbie Rochon, it has to be seen to be truly appreciated.

This film is a lower budget feature but the creative minds behind it have presented it in such a way you wouldn’t notice. I would of happily not of questioned this film if someone had told me it had a major studio budget. Mix that in with one hell of a cast who deliver on every beat of the tension that is mounted in this film its a triumph of lower budget filmmaking and sets the bar high. This is something lower budget filmmakers should be aiming for.

I have every confidence the popularity of this film will grow through word of mouth, as currently it’s IMDB rating is low and it deserves a higher score. I want to revisit this in a year as I guarantee the score will shoot up as more people have access to this film.

Check the film out on: 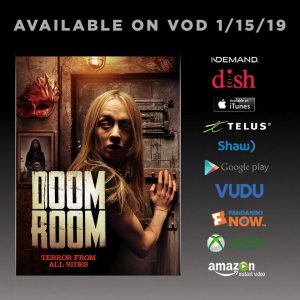