Bunkheads is a six episode series about a group of four lovable goofballs: an oddball teacher, a floundering actress, a techie workout warrior, and an immature wannabe rapper. You may think the hordes of undead are the biggest threat during a zombie apocalypse, but annoying roommates can be almost as much trouble.

Starring JOSH COVITT (The Mindy Project), CARLY TURRO (Homeland), KHALIF BOYD (Criminal Minds), and CHRIS O’BRIEN (Rosewood). Created by Will Gong, Directed by Lauren Klixbull, and Produced by Gabriel Reiter.
Bunkheads launches on Amazon Prime Video December 13, 2018.
“A hilarious, wholly original spin on a zombie tale, brilliantly framed within the unexpected context of a sitcom. Witty zingers and outstanding comedic performances punctuate Bunkheads, making it one of the most side-splitting comedies to hit the web in ages. It will leave you in stitches as it begs the question – how has this delightful premise never been explored before? An absolute must watch.10/10”. — Film Blogger, Noam Kroll 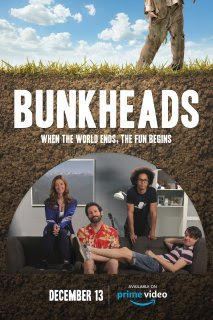 They have risen! The hit series taking the US by storm, BUNKHEADS!!