Celebrating its 40th anniversary, John Carpenter’s 1978 horror classic is being re-released in advance of David Gordon Green’s sequel, and will return to theaters beginning September 27th, 2018.

From the press release:

In the film, the villain, Michael Myers, has spent the last 15 years locked away inside a sanitarium under the care of child psychiatrist Dr. Sam Loomis. On October 30, 1978, Myers escapes and makes his way back home to Haddonfield, turning a night of tricks and treats into something much more sinister for three young women, including Laurie Strode, the star-making role for Jamie Lee Curtis.

The original Halloween will be released on over 1,000 screens in over twenty countries across the globe. “I’m thrilled to have the original make its way back into theatres, as we prepare for the release of the sequel. Having both back in theatres this fall is remarkable,” says director John Carpenter.
Fans will be treated to view big screen presentations of the restored and remastered digital print, created under the supervision of the world-renowned cinematographer, Dean Cundey.
“We are thrilled to be a part of the 40th anniversary celebration, working with Compass International Pictures and Trancas International Films to bring the most fear-provoking and enduring horror movies of all time to cinema screens around the globe,” said Mark Rupp, Managing Director, CineLife Entertainment.
The release of John Carpenter’s Original Halloween comes just ahead of the release of Halloween (2018) – the direct sequel to John Carpenter’s classic. Jamie Lee Curtis and Nick Castle reprise their roles as Laurie Strode and Michael Myers, respectively. It is set for release on October 19th, a week before the 40th anniversary of the original Halloween release date.
For theaters and showtimes, please visit CineLifeEntertainment.com. 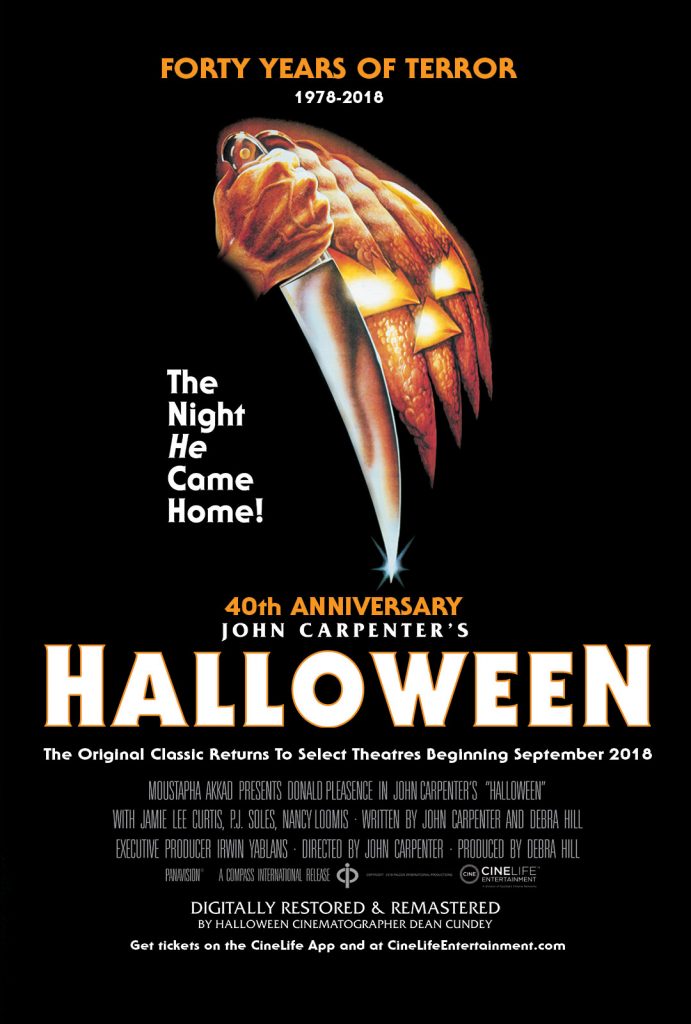