I was lucky enough to recently see the full Japanese cut of their new Big G film, Shin Godzilla.

Now I must mention that I LOVE Godzilla Flicks and all other Giant Monster/Kaiju films. Gamera, The Beast from 20,000 Fathoms, King Kong, Ultra man, The Valley of Gwangi, The Monster from a Prehistoric Planet, and so on and so forth. Just bring’s me back to my childhood when every Sunday morning our local affiliate would play back to back giant monster flicks. I’d sit Indian style on our thick green carpet in our wood-paneled living room, Godzilla and Voltron toy’s around me, a bowl of Count Chocula and a drink box of Ecto Cooler Hi-C in my Masters of the Universe TV tray, as I cheered on Big G as he stomped a mudhole in other Kaiju that dared menace Tokyo.

It goes without saying I was amped to see this sumabitch, especially since it had been 13 years since Toho had made a film with the big guy. All we’ve had is the 2014 American version, which while not bad (def better than that fucking insult from 98), it lacked that Japanese charm. The peep’s from the land of the rising sun know how to do it right!

This bitch had me interested from the moment it was announced and Toho informed the world that it would be a darker, grittier Godzilla film than we were used to. Being a fan of the 1954 original, my favorite of them all, which was absolutely the darkest version, I was excited to see what they had in store. I like my Godzilla scary and out of control.

The original Gojira (Godzilla in Japanese) was more than a monster film, it was a political statement. Less than a decade before, in 1945, Japan was devastated by 2 atomic bombs. It was the first ever use of nuclear warfare and it stunned an already war-torn world. The level of destruction that was unleashed on Hiroshima and Nagasaki  had never been witnessed in the history of the planet. Even today, the after effects of the bombings is still felt. Entire areas of Japan were rendered unlivable due to radioactivity left in the bombs’ wake. 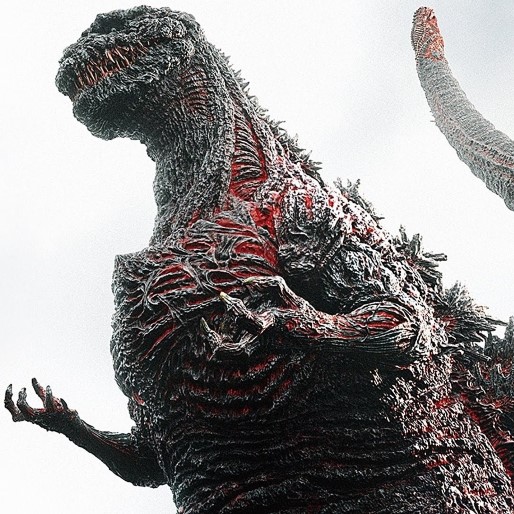 In 1954, Japan, along with other countries were very concerned about such weapons existing (As they should!). These weren’t simple explosives, these were weapons that could forever alter the planet or maybe even destroy it (Fucking humanity!). It was a Frankenstein’s monster, created but ultimately, beyond man’s ability to control. Director Ishirô Honda wanted to hammer that home by making a film that served as an allegory for the potential devastation the bombs and it’s radiation could wreak.

Godzilla was a by-product of the bombs, a creature formed by man’s thirst for power; The result of our inability to control that which we don’t fully understand. The destruction the monster causes in Tokyo, the loss of lives, served as a mirror to what transpired not long before. The message was clear: Play with what you don’t understand and you may unleash a monster, one that might consume us all.

Gojira 1954 was a dark, raw, and emotional film. Considered one of Japan’s greatest film achievements. When Toho decided to do a sequel in 1959, they kept the ton somewhat dark, but the point of the film was no longer political, it was a straight monster film. Toho was interested in cashing in on the success of the original. Godzilla was a star and they were going to let him shine and shine he did for 31 films. None, however, ever captured the power and awe of the original…until now.

When the credits rolled on Shin Godzilla, the first Godzilla film to be a complete remake (all other’s were connected to the 1954 film), I was in stunned silence (which for me is a feat). Directors Hideaki Anno and Shinji Higuchi did the impossible: they made a Godzilla every bit as powerful and moving as the 1954 original.

Five years ago, on November 3rd, the anniversary of Japanese’s release of the 1954 Gojira, Japan was rocked by it’s biggest earthquake ever. 15,000 people lost their lives and Japan was left in ruins. Not since the bombs in ’45 had the Japanese experience such utter destruction. Worst of all, many lives could have been saved had the political leaders acted faster and more responsibly; had they not had to depend on outside sources for help. Japanese citizens have not forgotten this as their push in recent years to become more self-reliant has demonstrated.

Hideaki Anno and Shinji Higuchi, as Hondo did before them, tapped into the fear, anger, and frustration of Japan and its citizens to tell a tale of a country unprepared to deal with disaster, of leaders who are more concerned with their own ambitions and are far too disconnected from the people they serve.

It’s a peaceful day in Japan, not unlike many other days. People going to and from work, shopping, or spending time with loved ones. Suddenly the ocean boils and fills with blood. Moments later, a giant creature emerges and makes its way to land where it proceeds to leave a path of destruction in its wake. The Prime Minister and his cabinet argue over how best to handle the situation as the people they are sworn to serve die by the minute.

It becomes clear, eventually, that Japan is not set up to deal with this situation and so they ask for help from the US. What follows is backroom political deals and under the table dealings as everyone involved angles to use the situation to further their own agenda. All while Godzilla continues his rampage.

One of the things that really impressed me was how real the story felt. If a giant creature suddenly rose up and attacked, this is how our leaders would act. For decades we have watched as they used war and tragedy to further their agendas, sacrificing countless lives and tearing apart whole countries. What we see in the film is by no means a stretch, it’s reality, which is probably why the tagline for the movie is “Reality vs Fiction”. This is a bold fucking statement the filmmakers are making and I love it!

Gone are the over the top characters (with the exception of Satomi Ishihara, but the woman is painfully beautiful so I’ll let that slide) of previous Godzilla films. Here we have a cast of regular people played by fine actors either trying to survive or use the situation to their benefit. The real monster of this film is humanity. Godzilla is merely a cause, not an effect.

As for the King of Monsters, he looks fucking amazing! This is the most frightening I’ve ever seen him look. This is not a man in a suit, it’s all CGI, a first ever for a Godzilla film. While it’s not Hollywood CG, it does its job and well. This is a Godzilla unlike any before. Standing at 389 feet (118.5 meters for everyone else in the world.) tall, the biggest Godzilla ever, he is nothing less than impressive! I mean, in the film he is referred to as “Evolutionary perfection” and “God-like“! When he does his thing it’s something to behold! My fucking jaw was on the floor!

The story and the action blend to give us, the viewer, an amazing experience. One I haven’t experienced at the cinema in quite some time. That said, I should mention that this film isn’t just a monster attacks film. Yeah, there’s lots of Godzilla action, but much of the film takes place in government boardrooms. This is a human story just as much as the original was. Those who prefer their Kaiju flicks less thoughtful and more full of monsters will be disappointed. However, those who enjoy a relevant, emotional, well-told story that features a badass monster laying waste to a country, will be quite pleased.

Bar none, this is the best damn Godzilla film since the original, equaling the original in tone and emotional impact. It took 62 years and 31 films, but they did it. Godzilla is reborn and he’s off to an incredible start!

I don’t do this often, but I give Shin Godzilla 5 Grues.

The American release is slated for sometime in 2017. When it drops, do yourself a favor and catch it in theaters. Fuck the American version. THIS is Godzilla in all his glory! Nuff said!