A Damned Shame: Hotel of the Damned Review

Hey guys, Thakgore here and today I’ll be reviewing Hotel of the Damned which will be released on VOD December 6th.

Directed by Romanian filmmaker Bobby Barbacioru and starring Peter Dobson (The Frighteners) and Louis Mandylor (My Big Fat Greek Wedding), Hotel of the Damned is a promising film plagued with terrible direction, bad acting, poor editing and sloppy fight choreography. Had I not gotten to watch it for free, I would have wanted my money back.

As the film opens we are treated to a flash forward of an unidentified girl being pursued through dark woods by men wielding sharp weapons. Meanwhile, on a nearby road, a car carrying our main characters is traveling along. The car hits….something (maybe the woman, it was shown twice in the movie and I couldn’t make sense of this scene to save my life) and goes off a cliff. We then cut to an interesting but muddled title sequence. This brings me to my first major complaint about the film. The imagery they used to market it.

When researching for this review I found several different posters for the film with each one taking a completely different path in trying to sell the movie to the audience. One suggests demonic possession, one depicts a woman on her knees with a hazy group of people in the background bringing to mind a zombie horde, and the last has a man standing next to an overturned car in front of the titular building with an army of menacing figures atop it. Only one of these posters is even close to the actual plot which involves Wrong Turn-like cannibals in an abandoned hotel. The opening credits are filled with fleeting shadows of zombie-like hands and even a stalking werewolf appearing alongside an animated machete cleaving the stitched together flesh on the screen over and over again. Only the machete is relevant to the plot. All of these things left me feeling very confused about the movie going in. I wasn’t sure what I was getting myself into.

The movie then truly begins as we are introduced to ex-con Nicky (Mandylor), and his best friend Jimmy (Dobson). Jimmy is picking Nicky up after the latter is released following a five-year stint in a Romanian prison. Nicky immediately wants to go and see his daughter, Maria (Romanian actress Manuela Harabor) but when he arrives at her home he is informed by her mother that she has run off with a criminal that she has fallen in love with. Nicky and Jimmy decide to go and get her back. They find her with her scumbag boyfriend, Bogdan (Bogdan Marhodin) and after a loud and violent encounter proceed to take her home. While driving her back they get into the aforementioned car crash, which they survive, and find shelter in a nearby, abandoned hotel.

If it seems that I flew by all that very quickly it’s because that’s what the filmmakers chose to do. The first half of the movie is rushed with the details filled in by frequent flashbacks. It’s an unnecessary narrative device that serves no real purpose and is entirely abandoned half-way through the film. The movie gains nothing from being told in this manner and it seems like the director was trying to be somewhat artistic and then just got tired and gave up.

The rest of the plot is very predictable. They reach the hotel, run into the “cannibals” and then mundane hijinks ensue. I use quotations around the word cannibals because I’m not quite sure that’s what the movie intends for the bad guys to be. The characters refer to them as both “things” and “creatures” despite the fact that they mostly look like regular people with blood and feces smeared all over them. Sure, one of them has sharp teeth and they make weird noises and such but they were far less creature-like than any of the cannibal clans in films like The Hills Have Eyes and the Wrong Turn franchise.

Then there’s the acting. While I can tell that everyone involved was trying their best, only Dobson manages to give a passable performance. Mandylor plays his character with such melodramatic angst it would make even the most ardent telenovela fan blush. Manuela Harabor is either screaming or crying at any given moment and every line sounds like she’s on the verge of a nervous breakdown. Normally in a horror movie you might think that’s a good thing, but trust me, it wasn’t. The “cannibals” do okay, however, given that all they do is snarl and laugh creepily. 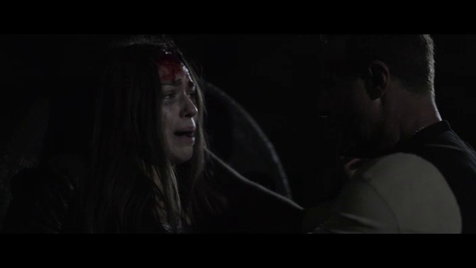 Oh, and if you wanted gore, better go find another movie. Every kill is done off-screen or is obscured somehow. The only gore is in a scene that involves the cannibals roasting and eating the unidentified woman from the beginning of the movie. They don’t show them carving her up, just handling and eating various parts. It’s rather disappointing because I was hoping that, at least, I’d get some fun gore effects. Alas, it was not to be.

The climax of the film, which I won’t spoil, is so poorly conceived and choreographed that I was expecting very little and was still let down. Even the ending, which would have been uplifting in a better movie, was overacted so badly that I almost turned away from the screen.

I know it sounds as if I hated the film, but I think ultimately I was just really disappointed. The premise is derivative but intriguing, and I could see potential in the script had it been handled by a more competent director and editor. I know that my expectations should have been low considering that this is a budget title shot in Romania, but this movie doesn’t even come close to meeting even lowered expectations. It’s that bad. I recommend you stay far away from this one.